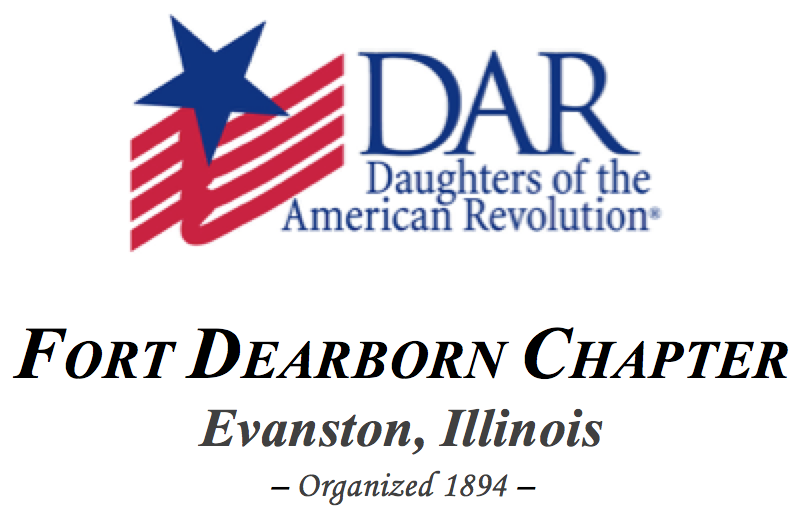 (1843-1934) “Evanston’s First Lady.” Served on the Northwestern University Board of Trustees, was the first president of the University Guild, and founded Evanston’s Fort Dearborn DAR chapter. She was instrumental in shaping NU’s music department, one of the nation’s first university-based music schools. Evanston’s Lunt Park is named in her honor.

(1862-1945) Attorney, first female Illinois Justice of the Peace, first female presidential elector, helped raise the Illinois age-of-consent law and was instrumental in granting wives equal guardianship of their children. She was key in the Illinois women’s suffrage movement and in the passage of the 19th Amendment to the U.S. Constitution.

(1833-1913) Oberlin graduate, educator, temperance worker, poet, magazine editor and contributor, hymnist, prolific novelist, prominent Chautauquan, and charter member of Evanston’s Fort Dearborn Chapter DAR. She raised funds in support of the Union cause during the U.S. Civil War and served as Dean of Women at Northwestern University, which later granted her an honorary doctoral degree.

These illustrious Evanston women were all members of Fort Dearborn Chapter Daughters of the American Revolution. 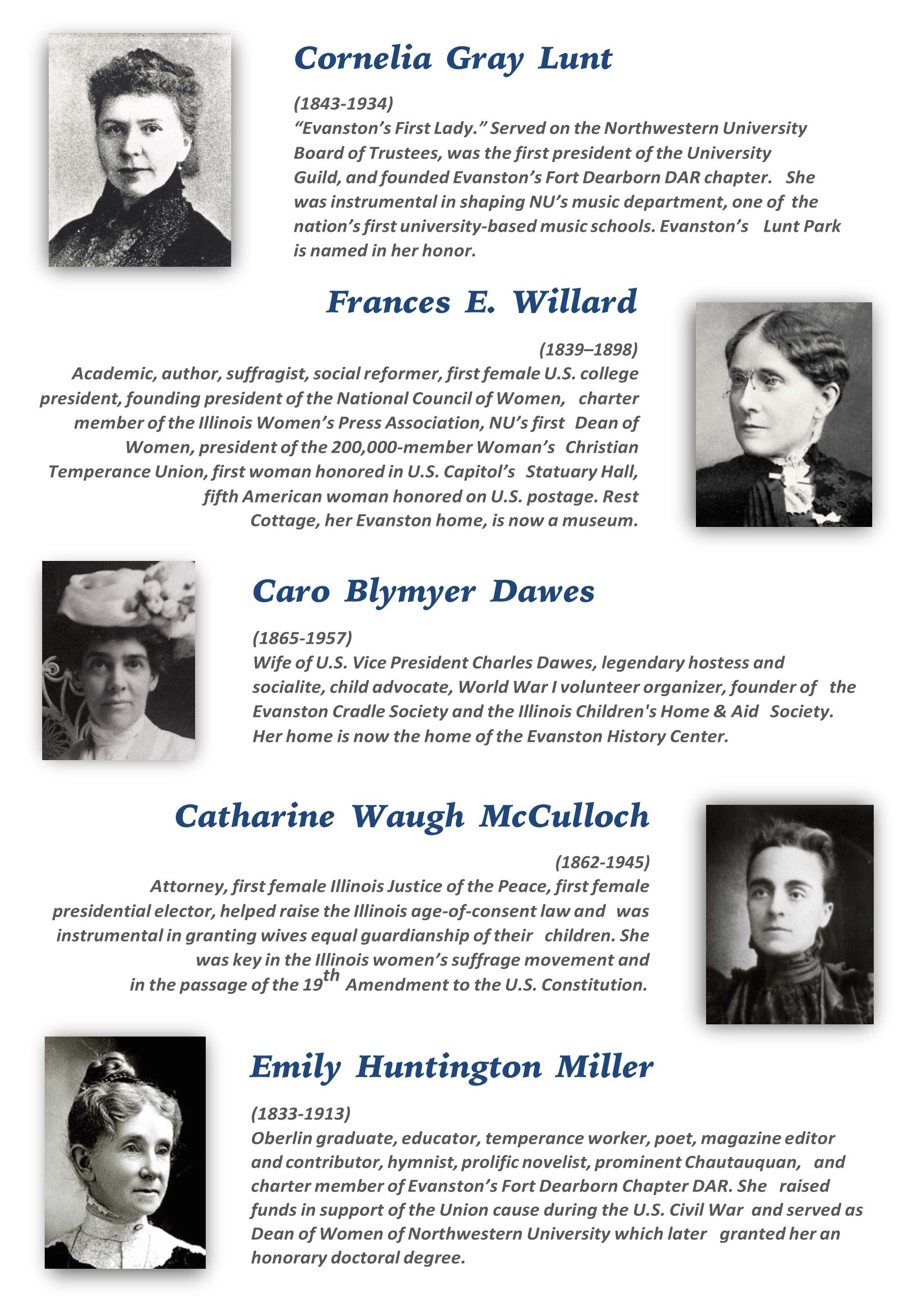 These illustrious Evanston women were all members of Fort Dearborn Chapter Daughters of the American Revolution. 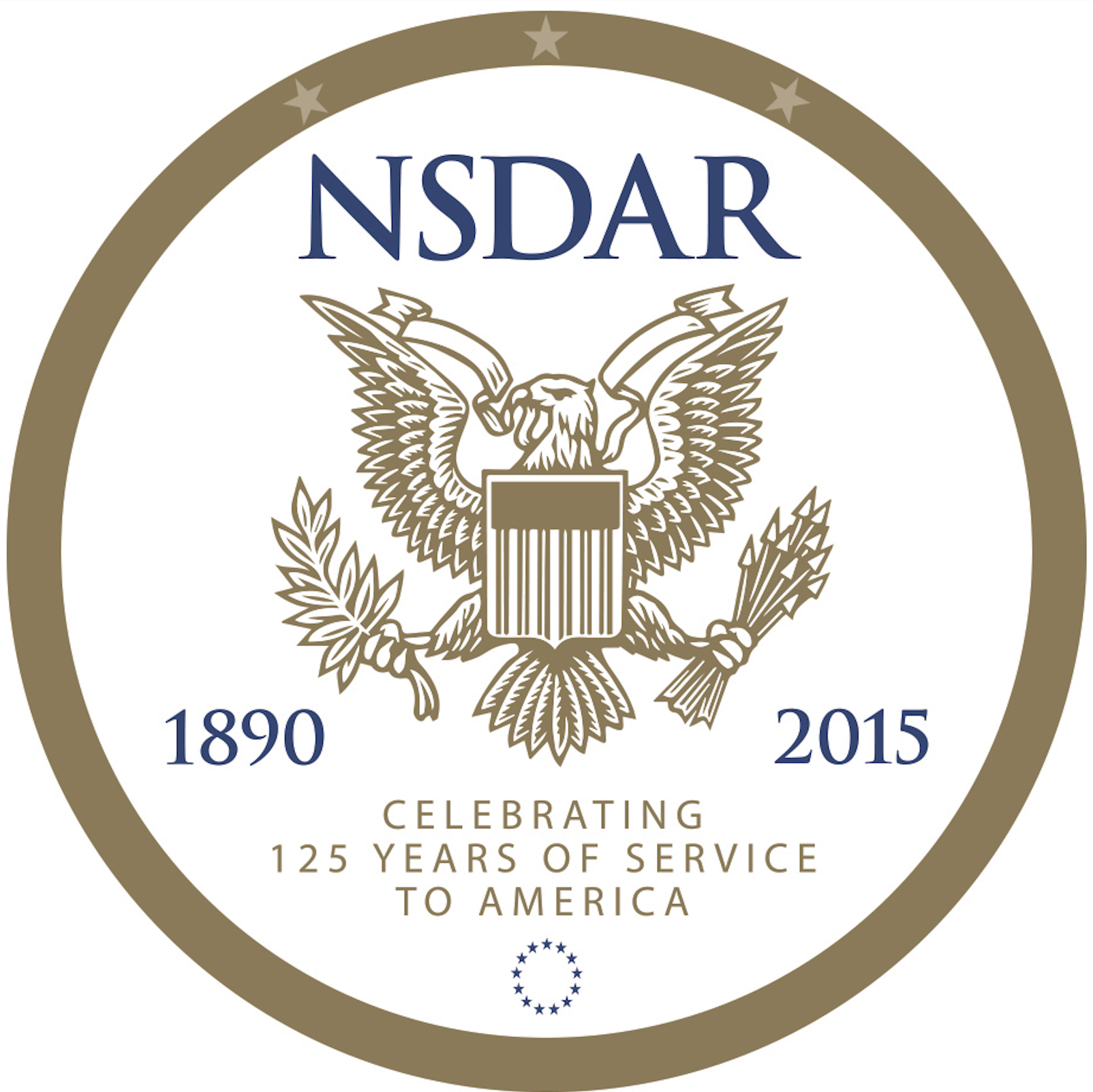 June 6, 1894 – “…. a goodly company assembled at the residence of Miss Cornelia Gray Lunt for the purpose of organizing themselves into a chapter of the Daughters of the American Revolution… Miss Lunt had been appointed chapter regent by the National Society …”

1919 – The William Dawes Society Children of the American Revolution was organized.

1928 – The chapter published Evanston: Its Land & Its People by Viola Crouch Reeling.

1964 – Fort Dearborn was recognized as the largest DAR chapter in Illinois, with a membership of 431.

2007 – The DAR War Memorial in Patriots Park was restored and rededicated.

2013 – The William Dawes Society C.A.R. was reorganized at Dawes House.

2016 – A scholarship was established for eligible, active Junior Members. The chapter participated in the NSDAR 125th Anniversary National Day of Service with the William Dawes Society C.A.R.

Today – Meetings are held regularly at Dawes House, home of the Evanston History Center, and at Frances Willard House.

Tomorrow – The Fort Dearborn Chapter will continue outreach to the Evanston community and to American veterans.

We will support the Northwestern University NROTC, the University Guild, and an internship at the Frances Willard House Museum and Archive.

We will actively promote the conservation of natural resources.

Through both monetary contributions and volunteerism, we will support the historic preservation of Dawes House and the Frances Willard House Museum.

We will continue to sponsor our C.A.R. Society and to actively promote the mission of the NSDAR.

Web hyperlinks to non-DAR sites are not the responsibility of the NSDAR, the state organizations, or individual DAR chapters. This site was updated on 20 Jan 2021 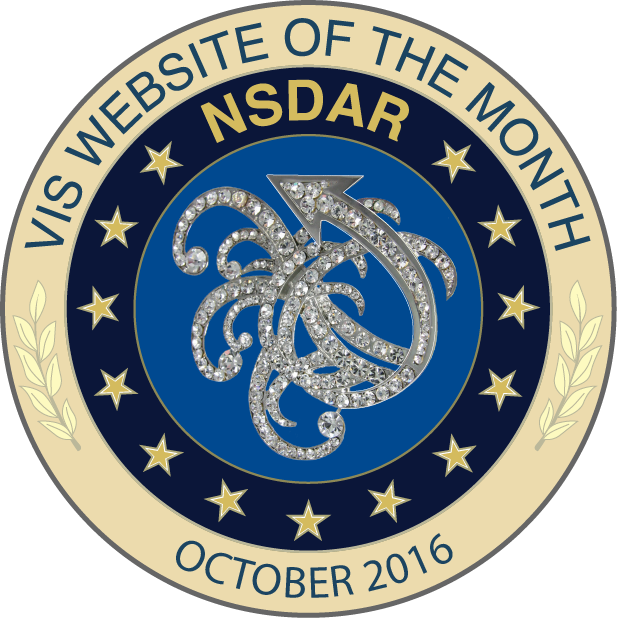 The DAR is a non-profit, non-political women's service organization dedicated to promoting historic preservation, education, and patriotism, and honoring the patriots of America's Revolutionary War.

Web hyperlinks to non-DAR sites are not the responsibility of the NSDAR, the state organizations, or individual DAR chapters. This site was updated on 20 Jan 21